Now that my busy season is over it's time to start preparing for the coming busy season. It'll be here before we know it! My friend Dana at BlueDaffodilCrafts has set a goal to make 50 things this year and I thought it would be fun to join her, but seeing as I'm already more … END_OF_DOCUMENT_TOKEN_TO_BE_REPLACED

As you can see, I have been quite busy working on Halloween & Christmas orders and filling my Etsy shop. I’m working at my regular job More this year than I was last year, and it has decreased my work time for my shop. So has having a toddler in the house! But I am working … END_OF_DOCUMENT_TOKEN_TO_BE_REPLACED

Recently I was talking with a friend who said she was intimidated by someone's artistic abilities. I get it. Been there, done that, have the t-shirt. Actually, I don't have the t-shirt but there should be one if there isn't already. But artist envy is something I believe all creatives deal with. The fact of … END_OF_DOCUMENT_TOKEN_TO_BE_REPLACED

I have a new fox hat pattern to share with you!! Yay!! It's such an adorable pattern for Fall. Does anyone else LOVE the fox decor that has popped up for Fall in the last few years? I love it! It's my favorite!!   SOME FOXINESS FOR YOU... Before I get to the pattern, I … END_OF_DOCUMENT_TOKEN_TO_BE_REPLACED

Instagram and other social media platforms have been out for a little while now, but I still feel like a total newbie. I have learned a TON in a relatively short amount of time, but I feel there's still so much to learn. I think I have dabbled in most of them - Instagram, Twitter, … END_OF_DOCUMENT_TOKEN_TO_BE_REPLACED

Fall is by far my favorite season of the year! I love Fall decorating and the pumpkins!! Helloooooo pumpkin spice!! Yes, I'm THAT girl. I'm overjoyed when pumpkin spice lattes make their debut. As I write this I'm drinking coffee with pumpkin spice creamer. Yum!! In the spirit of Fall, today I'm sharing with you … END_OF_DOCUMENT_TOKEN_TO_BE_REPLACED

**This post contains affiliate links** How can crocheters help the thousands who have been affected by Hurricane Harvey? The Prickly Pear Cactus is the state plant of Texas, and so I have designed a Prickly Pear Cactus Keychain for sale in my Ravelry Store. This cactus is highly adaptive and can grow in a variety … END_OF_DOCUMENT_TOKEN_TO_BE_REPLACED

Character Throwbacks have arrived!! My newest project is here! The inter-webs have been searched for characters in the public domain due to their age or no copyright renewal. First of all, there are some goofy characters out there...     This is the first installment, or issue, of Character Throwbacks, and I will be creating … END_OF_DOCUMENT_TOKEN_TO_BE_REPLACED

In April 2013 I was diagnosed with Thoracic Outlet Syndrome (TOS). But I didn't know then what it was they were diagnosing me with. Several years before... I began seeing an Occupational Therapist in 2004, due to numbness in my hands. The OT believed I had carpal tunnel from my time in college while getting … END_OF_DOCUMENT_TOKEN_TO_BE_REPLACED

I have been a busy gal this week! My focus has been on my Instagram account, but also on my Facebook page and, of course, my blog. I've also been taking some risks and working on a few new patterns and designs for my Etsy shop and Ravelry, as well as working on my Etsy … END_OF_DOCUMENT_TOKEN_TO_BE_REPLACED 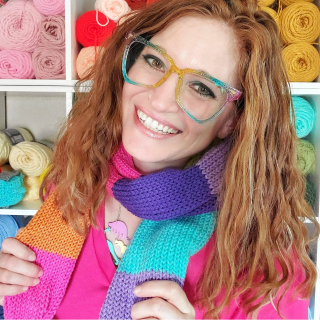 I'm a mom, business owner, and natural-born redhead. I enjoy all things creative and like to challenge myself to learn new things. I pretend to workout, but love taking walks when the weather is nice. I am fueled by coffee and hugs.

Did you know that crocheting can reduce the risk of Alzheimer's by 30-50%? That's amazing!!
Never fear, the gang's all here!!! Here's a question: If you could follow one fictional character on Instagram, who would it be?
Did you know that in less than 100 years, Yoda achieved the title and rank of Jedi Master? I'd say that's pretty good considering he lived to be 900 years old. In our lifespan terms, that means he made Jedi Master by the time he was about 8, relatively speaking.
Here's the little secret I've been working on! Can you tell what it is?
What kind of vibes are you putting out there? Are they the kind of vibes that others would want to catch?
What is your purpose in life? Today I was having a conversation about purpose. What is that you feel like you were made for? What makes you feel alive?

JESUS is My Resolution

It has been a couple months since I sat down to write. It’s a busy time of year, after all. There was one subject that I started to write about several times but chickened out every time. Maybe some day… My holiday season has been as usual, I suppose. Lots of things to do, traditions […]

YOU ARE ENOUGH. This short and sweet saying floats around pretty frequently, assuring us that we are enough. Many times we feel we’re not good enough, pretty enough, strong enough, smart enough…     We like the saying “You are enough” because it’s like a pat on the back or a warm hug that reassures […]